I’m Diego. I live in Johannesburg, South Africa and I have a passion for golf. I would love to be granted a once in a lifetime opportunity to prove what I am capable of by competing and representing my college at the highest level of golf.

Started playing national events in 2019, and through making cuts and performing well, I have been ranked 451 in South Africa after two tournaments.

I participated in 3 junior events in December with a best score of 75 and a finish of 7th place out of 80.

I came third in my home club, Randpark, club championships.

I represent the first team for my golf club.

My best score is a 70 off the back tees of Randpark Firethorn where they played the South African Open.

I attended King Edward VII School (KES) that has golf as a main sport in the beginning of 2018, and since then I have received golf colors within three months at the school, represented the first golf team in every fixture since joining the school and I have been given the honor to be the 2019 golf captain.

I am different because I don't hit the ball the furtherest, and I make sure I hit my greens and fairways. I am still relatively small built, and feel that as I continue to grow and get a bit bigger, I will see progress in distance and allowing myself to hit shorter irons in on most holes which will inevitably reduce my handicap. I am patiently waiting for myself to reach my peak where I can really start performing at a high level. I start and end every round with a positive attitude. I am determined to bounce back after bad holes. My focus is to try and get some red numbers after making a bogey. This shows my determination level and eagerness to excel is very high.

I want to compete in college golf because the United States have got facilities, colleges and grant phenomenal opportunities that many other countries fail to provide, which makes me see the United States as the perfect place to try become a professional golfer. I want to play college golf at a very high level so that I can one day have the opportunity to play golf as a professional and get my PGA tour card. Studying and playing golf, in my eyes, is the best way for me to come forward and achieve my dream.

Represent a division 1 college, with one day being able to be the college number 1 representative, travel and represent the college at the highest level tournaments and bring home the gold in tournament. I don't just want to be another player, I want to be a valuable asset to my college. At the same time I would like to further my studies and get a degree.

I want to graduate with distinctions so that I can have a decent degree, but while doing so become a world class golfer that shows high potential on the grand stage of golf. 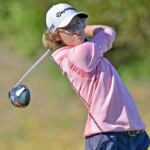