It has been a dream of mine to attend university in America ever since I first visited with my parents 10 years ago. My passion for field hockey has given me opportunities that I never thought I’d experience and it is because of this that I want to push myself even harder and not only play in America, but be able to leave a legacy wherever I go. The opportunity to study AND play in America is a dream come true and I will do everything in my power to not only make it happen, but to make it work successfully!

•I’ve played 3 seasons with Repton Ladies 1stXI Hockey Club and every year we have been promoted and I have conceded the least goals every season.

•I’ve played with Repton Ladies 1st VII for two seasons and in both seasons we gained promotion, once as champions.

•I spent two years at Repton School and out of the 4 National Titles we could’ve won, I won 3.

•I attended Granville Academy, a small state school which didn’t play hockey (I had to play for an outside club), for 5 years but due to my hockey ability was offered a scholarship to the prestigious Repton School.

•I’ve only ever been carded twice and that was both during indoor games so I’m very disciplined on the pitch.

I have been playing field hockey since I was 8. I started playing outfield however at one training session the manager needed someone to try on a new goalie kit, I haven’t taken it off since! I’ve played for many different clubs; Burton HC, Repton HC, Belper HC and Leamington HC however I was only able to play school hockey once I turned 16 due to the fact that my previous schools didn’t have a hockey team.

Joining Repton meant that I was able to train and practice field hockey 7 days a week, whereas I was only able to do that 3 days a week before I joined.

During my time at Burton Hockey Club (the team at which I joined when I was 8) I have won;

•6x goalkeeper of the tournament.

•U14’s junior goalkeeper of the year.

•Club goalkeeper of the years x3.

•Dedication to the club award.

When I was playing with Derbyshire I won;

•Goalkeeper of the region.

I’ve also played at a high level in soccer. I began playing soccer before I started hockey. This is due to the fact that my older brother was a soccer fanatic and always used to make me play with him! I’ve played and captained both of my school teams (Granville Academy and Repton School) whilst also captaining Burton Albion Ladies from U10-U16’s. During my time at Burton Albion I was top goalscorer in 3 seasons. I also won players player x3 and managers player x1. I attended trials at Aston Villa where I was offered a place on the team, however I had to make a decision on which sport to pursue as I was starting to take them both seriously so unfortunately I had to decline the place and focus on hockey. At high school I was able to balance my time better, so was able to captain the girls 1stXI at Repton School.

I have also had regional trials with soccer, netball and rounders however focused my time with field hockey. 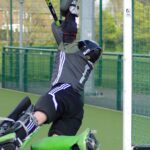