Sport has always been important to me. From an early age I competed in a number of sports, including soccer, rugby, running track, athletics, swimming and boxing. However it was four years ago that I discovered my true passion – American Football. I knew instantly that this was the sport for me, as even when I broke my ankle at this very first session, I refused to be put off, and four months later I was back and starting for my club in the first game of the season. I quickly developed into one of the best receivers in Britain, and my hard work was rewarded when I was named captain for the Great Britain Under-19 team in 2018/19, and ranked the #1 receiver in Great Britain for my age group.

I have a strong academic background with a record of achieving high grades in all of my subjects – including very good grades in GCSEs and A levels, contributing to a high GPA. I will sit my SATs in December, and expect excellent results.

I posses both natural leadership and competitiveness, as well as being extremely coachable, which will make me an extremely valuable asset to whichever college I attend, both on and off the field.

Will play for U19 Stuttgart Scorpions in 2020

Swam at a national level, (a gold and two silver medals at IAPS national swimming championships.) 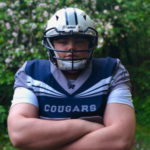