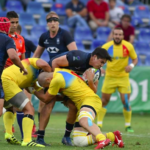 I am in the last year of high school at Clifton College, England. I am looking to join a college in the USA that will further my education in business studies and develop my skills and capability in rugby. I have played rugby at international level, most recently representing Hong Kong U20’s at the World Rugby Trophy held in Romania from 24th August to 10th September 2018. My ambition is to play professional rugby for a top level club and senior international rugby representing a national team. Ultimately, my goal is to define my professional life through the combination of my capability in sports and business.

At Discovery College, I played for the school U19/Senior side and was captain of school rugby in the 2016/17 season (at age 16).

In the current 2018/19 season, so far Clifton College First XV has played 6 matches and we have achieved 4 wins and 2 losses.

I played with the Flying Kukris U19 team that won the International youth tournament for sevens (IYT) competition in March 2017.

Through my participation with the Discovery Bay Pirates, I was invited to join the National Age Grade programme organised by Hong Kong rugby. I first joined the NAG at U14 level. In addition to the specialized training and coaching that is provided through the NAG program a variety of matches are played, including against touring sides (for example, touring sides from Australia).

In December 2017 (when back in Hong Kong from school), I participated in the NAG U19 training programme and its preparation for the traditional New Year’s Day exhibition match. Consequent to that (at age 17), I was invited join the squad from which the Hong Kong U19 team would be selected to play Canada in a 3 match series in March 2018. I was not able to return from school sufficiently early to play the first match but played in both of the subsequent matches. The series results were Hong Kong won 1 and lost 2.

As a consequence of my performance in the Canada series, I was invited to participate in the U20s World Trophy tournament (which is organised by World Rugby and sometimes referred to as the “Junior World Cup”), which was held in Romania from 24th August 2018 to 10th September 2018, representing Hong Kong.

The squad ran its training and selection process from June 27th 2018 until the tournament started in August. We trained twice a day (fitness and skills sessions) on 4 to 5 days each week for almost 3 months. I was delighted to be selected for the final squad to attend and represent Hong Kong at the World Trophy. I turned 18 in July before the tournament started.

During the tournament, we trained every day when no match was played and held review and performance sessions. This was an awesome experience and opened my eyes to the physical demand that is required in mens rugby at senior level.

We played against Samoa, Namibia, Romania and Uruguay. I am very proud to have scored my first try at this level against Namibia.

Hong Kong won 1 and lost 3 matches but achieved its highest finishing place in the tournament at 6th.

I am a dedicated rugby player and will always put one hundred percent effort into everything I do.

I believe that I have been able to play competitive rugby at international level (at an earlier age than others) because I have a good understanding of the flow of the game, usually being in the right place at the right time, and a very high tackle success rate. This combination makes me a valuable asset for my team

College will give me an opportunity to learn in a different and potentially more competitive environment and this will make me better a player on and off the field. College will also expose me to different opposition, styles of play and coaching skills, which will develop my game to a higher level.

In applying to college in the USA, I want to access a forum that will combine my ambitions to bring out the best in my academic education as well as developing my sports capability. I am looking to achieve a top class education that is recognised across the world and also to improve my athletic capability with sports skills coaching, fitness and conditioning at world-class level.

The undoubted centre of excellence for education in business studies and sports performance is the USA and my goal is to learn and develop from the best to bring out the best from me. 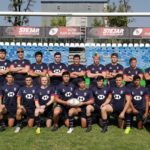