I want to experience college field hockey with professional support, playing in front of an audience, and a dedicated team.

I’m looking forward to an American adventure, making new friends and learning from great teachers. Since I was 12 years old, I’ve always played on the highest national level in the Netherlands as defender and mid-fielder and in those positions, I’m confident I can make a great contribution to any college field hockey team in the USA.

I started playing hockey at the age of 7 at my hockeyclub HC Rotterdam, the fourth largest hockeyclub in The Netherlands. There I played continuously in the first teams since I was 11 years old.

At the moment of Corona outbreak, 1st position in national competition

Selected for the District team Zuid-Holland

Played in the national competition (IDC 1) 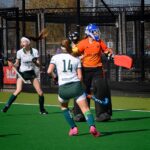