I’m a strong and very physical but fair rugby player, with a calmed mindset, having a wide vision of the game field. I’m aimed to play rugby for a competitive college, at the highest possible level, while pursuing my studies and exploring professional alternatives in rugby.

Best aspect of your game

Fast BiG (Back in Game)

Ample vision over the game field

Since I started playing rugby at 13, I have always been a very passionate and fair rugby player. Since that date, I never stopped both training and playing the best I can. I always give my 100%, no matter how adverse the circumstances are. I never give up! I’m a highly motivated person; always trying to encourage my teammates, so we can surpass our own limits every day.

I want to continue playing rugby at the highest possible level, while pursuing my undergraduate studies in the best academic environment that USA colleges may offer. In doing so, I will be able to combine all my passions while pursuing both my athletics and academic goals.

To succeed in rugby by representing my college, earn a degree with the highest possible scores, and then pursue a PhD in science.

I’m an easy-going person and always have a smile on my face. Life is too complicated to be worried about! 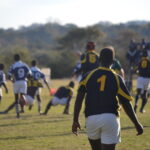