My aim from this program is to receive a good academic degree in college while also playing a sport that I have a passion for and wish to excel further into a career.

Starting player with at School senior level and club senior level in the J1A league in the Connacht province with Castlebar Rugby.

Played with Connacht Development squads from U14 to U17 starting regularly in matches.

Finished fourth in J1A this year at senior level

Won plate at U17 level

I've played rugby from 8 years old and have always loved it, putting my all into every aspect of the sport. I've also played Gealic football for a number of years and for one year with Mayo U16. 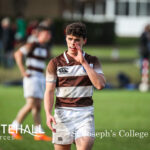