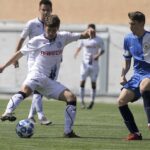 I started playing soccer when I was 8. I want to become a top level player, but a long time ago I understood that education is one of the most important things in modern life. Also, I think that being a top level player isn’t only about skills, it’s also about intelligence and good human qualities.

I have won the best midfielder of the international tournament

I have started my journey with sport when I was 4 years old. At 4 I had my first training of acrobatics. I was engaged in acrobatics for 8 years until I was 12 years old. During these years I won a lot of competitions and got the title of "candidate for master of sports". But from the young age I knew that I want to become a soccer player. My godfather was a professional soccer player, so I wanted to be like him. And prove him that I can be better.