Be different enough to stand out, but not in a creepy or invasive way.

In Grade 10, I won the best U16 player award, and future prospect award at my high school. I was also the captain who everyone could learn from and enjoy it at the same time. I scored 11 goals, and had 8 assists for U16s in 15 games I scored two goals from the halfway line that year as well. I also played every game for the first team, and started all of them as well. I had 5 goals, and 2 assists for them, in 15 games. I got half colours in soccer.

In Grade 11 we played in a national tournament in East London, and I was placed in the best 11 of the tournament as CB that year. I also got the players player of the year, as well as full colours in Soccer. It's a reward for excellence in any sport, or academically.

In my last year of high school, we played in the national tournament again, and I was placed in the team of the tournament once more, but as a Midfielder this time. We reached the final, but lost 5-4. I scored two goals, and had 2 assists, and was man of the match. I got the player of the year that year, and I trialed at Platinum Stars, but was not taken in the team because they only wanted to work with South African players

I don't look at my progress through the pain of my past. It's really important that people understand this simple concept because they'd be able to see more of the progress they're making in whatever area of life they're working towards.

I'd like to compete in college to test myself with other athletes, and see my progress while learning and having fun at the same time.

Be the best player in my team and league with the help of those around me. Get good grades as well. Meeting wonderful people I can share many great memories with is high up there as well.

I'm qualified in NLP and Hypnosis through the Tad James company, by my coach, Simon Glendhill in Cape Town 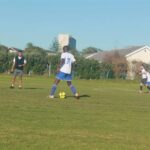