My objective is to combine my academic studies and sporting talent. I have the total motivation to give my best in both aspects, I am a hard-working person and always try to improve myself day by day.

2022
I will play “Liga Femenina” with Club Universitario de Deportes

Awards, press
Player of this tournament and top scorer
Being the top scorer for my team with 5 goals and 1 assistance
Considered the player of the match in two times
Nominated player of the week

I love the competition and I always strive to achieve it, the level of demand that exist in colleges is something that I want to experience, I consider that I will give a good level and I will give my 100% in everything.

I want to improve myself academically and sportingly, graduate in the career of my choice with good marks and win many things with my team. 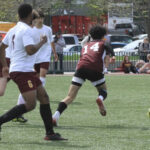