My main objective when coming over to America is that I want to prove to myself that all the hard work that I have put in to get to this point will all be worth it.

Ever since Covid arrived, I have been tested physically and mentally trying to either stay on top of grades or stay on top of fitness for when we’d eventually return to football, and I believe this has helped me grow as a person and especially independently.

Academically, I have a strong passion for anything to do with business, this is a subject I wish to study if I am given the opportunity to come to America.

On the Football pitch, I am easy to get on with and have always had a good relationship with both players and managers. What makes me different to most players is my ability to play both attack and/or defense and also to be able to confidently use both feet in any situation.

I have academy experience as both a centre attacking midfielder and also full back on either side, this is something I am proud to say as not many people get the chances I have had and therefore, want to take the final chance to see where I can go with football, whilst also having the chance to get a degree in something I am passionate towards.

In addition to the above, I have been a near constant representative of The Eastleigh Football Club Academy Programme. This was from 2010-2020 (with a break to take up the offer with Bournemouth FC).

Personally, I think that I see myself as follows. I am...

I played in a forward attacking position were I played in a No.10 role. Here my main job was to receive the ball from midfield and look for the pass to unlock the opposition’s defence.

I spent the majority of my footballing life in the above position and I think that this has helped me where I have played at left/right back. I am aware of what I would be thinking going forward and that helps me with reading the game (as a defender) and where to be positionally.

As well as playing, I am also interested in the coaching side of the game. I have successfully completed the FA Playmaker Course which will lead on to the following.

I am hoping to complete these courses over the next couple of years.

What makes me different to other people is my work ethic. Whether or not things are going my way, I am always trying to put in 100% because I know that if I don’t, I’m only affecting my chances at reaching the top giving my place to somebody different. On the football pitch I believe what makes me standout beyond other players is that I’m loud but I can also make the perfect pass with my vision. Something which has always stoodout about my game is my vision and my ability to play short, mid range or long distance passes. My ability to make those defense splitting passes is like no other and therefore using both feet in the No.10 position with that ability makes me hard to stop.

What has attracted me to this opportunity is the experience. This is something totally different to the UK education system and is a great way to combine the 2 things I enjoy most. I feel coming here will also benefit me a lot in the future as I grow into the world of business to find more job opportunities.

My goals academically are to work hard, pass all my classes and to have fun doing it. This is a great opportunity for me and one not many people in the community I live in have ever had the chance to experience and therefore I want to take advantage of this to give me the best possible way of succeeding in life. Sporting wise I want to show off what I'm about to new and different people. Again, I want to have fun but I want to be professional and ultimately be the best teammate I can on and off the pitch. 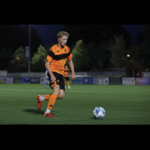